He is a species of marlin found in tropical to temperate Indo-Pacific oceans not far from the surface. Epipelagic and oceanic species, usually found above the thermocline, but unlike species it ventures more readily into higher
latitudes, tolerating temperate waters. The species is strongly oceanic, rarely entering coastal waters, and is most often seen near islands, seamounts and boundary currents where it feeds and breeds.The striped marlin is a predator that hunts during the day in the top 100 m or so of the water column, often near the surface. One of their chief prey is sardines but also wide variety of fishes like mackerel, crustaceans, and squids. The Striped Marlin consists of 42-48 rays on its tall first dorsal fin that is almost the same or longer than its body depth while the second dorsal fin is much smaller. They have torpedo-like and compressed bodies. They have around 10-20 clear, visible bluish stripes on the sides of their bodies even after death. Stripes consist of cobalt blue dots or narrow bands. First dorsal fin dark blue, other fins usually brown.The color of their bodies is dark blue or black above and silvery-white on the bottom. Striped Marlin has an average length of 2.9 m and a maximum length of 4.2 m and can weight up to 220 kg. Striped Marlin reached sexual maturity at an age of one or two years or 1.4 m for males and two or three years or 1.8 m for females. They can live up to at least 10 year. About reproduction Eggs is approximately one mm in diameter, but exact size not known. Mainly targeted via surface longlines in the commercial fishery. The species is also a popular recreational target. Recent stock assessments indicate a declining Pacific stocks, with commercial catch rates falling and the average size of fish captured decreasing. IUCN Red List Status for this fish is Near Threatened (NT). 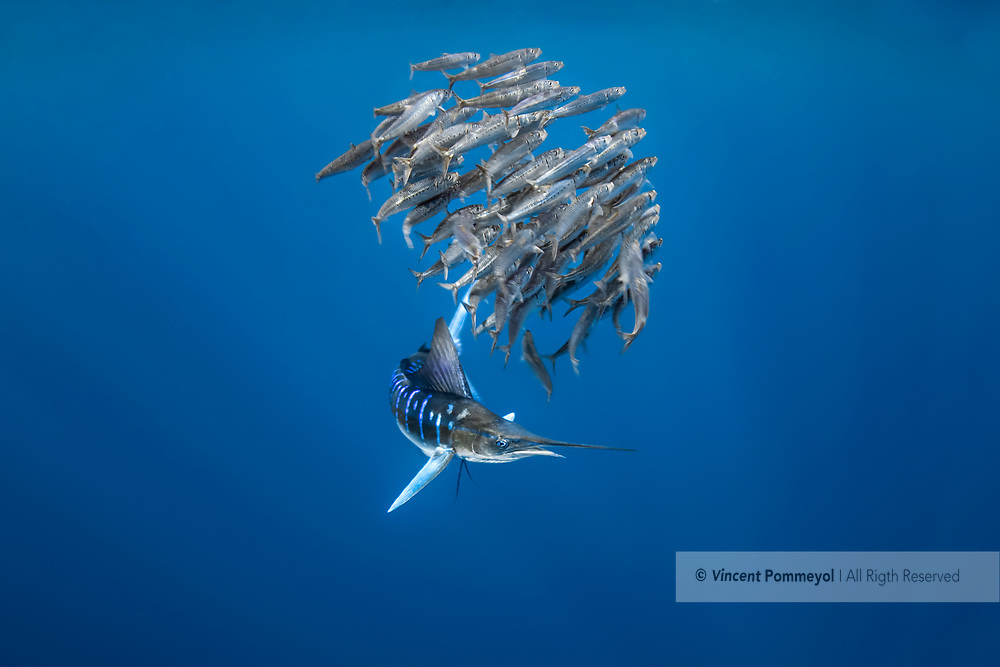